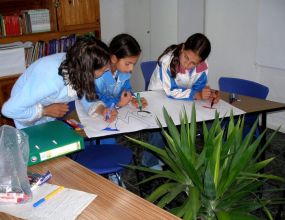 
Education is universally seen as a key requirement for healthy, democratic societies. Research often reveals the strong link between strong public education systems and prosperous nations. It is no surprise therefore that the UN convention on the Rights of the Child (CRC) explicitly considers the right to education a fundamental right.

Besides providing the necessary basic skills and knowledge children require at an early age, schools have a huge role in facilitating social interaction. At school, children gain essential social skills, learn to engage in team dynamics, and start building their identity, both at individual and group level.  In an increasingly globalised world, where we communicate more and more often online, the importance of a safe, inclusive environment where children can safely begin to construct personal connections with each other is paramount.

Unfortunately, not everyone has access to decent education. Many children are deprived from an adequate learning environment due to discrimination. This is not only unfair, it is also illegal. The International Covenant on Economic, Social and Cultural Rights (ICESCR) states that ‘education must be accessible to all, especially the most vulnerable groups, in law and fact, without discrimination.’

Discriminatory practices in education affect Croatian Roma communities with considerable intensity. Estimates show that roughly 40% of Roma attend ethnically segregated schools. Early school leaving rates for Roma in Croatia are 68%, compared with a national average of 3%. Because Roma often live in the periphery of cities and towns, transport to and from school has remained a considerable issue. Neo-liberal tendencies in Europe are exacerbating these problems, as state funding for school meals, transport and learning material are subject to budget cuts year after year, which affects Roma with particular severity.

In 2010, the Orsus and Others vs Croatia case made clear that discrimination against Roma students in Croatia is an uncomfortable reality. The European Court of Human Rights found that Roma pupils in two primary schools of the Međimurje region were suffering discrimination by being placed in Roma-only classes. This was in clear violation of Article 14 of the European Convention of Human Rights and Fundamental Freedoms. A more detailed summary of this case can be found here.

While the Croatian government developed an Action Plan to combat discrimination against Roma students, a report from Amnesty International from 2011 suggests that the measures do not go far enough in tackling discrimination. To give an example, the Action Plan does not specify how to ensure the same curriculum is available to Roma pupils. This is problematic, considering Roma pupils were being taught a curriculum which is reduced by 30%. This reduction has an obvious detrimental effect on their learning process, making Roma students less prepared when compared to non-Roma students.

Far from improving, the situation actually gets worse as Roma kids get older. The graph on the right shows that their presence in education fades away over time, especially after they complete compulsory education. The gap between the share of Roma and non-Roma who attend school widens dramatically after they turn sixteen, and their presence thereafter is much lower for Roma than for non-Roma.

Because of traditional gender roles and expectations – which are in no way exclusive to Roma communities – Roma girls are particularly vulnerable. According to a gender equality analysis by the World Bank, 78% of Roma girls drop out of school early, compared to 60% of boys. Worryingly, only 6% of Roma girls finish secondary school. This data highlights the need to pay attention to gender inequality in the process of integrating Roma communities successfully.

Finally, the economic implications of excluding the Roma from decent education are often overlooked. This is dangerous because the social spending required to support Roma integration tends to be seen as a cost, rather than as an investment. The National Roma Inclusion Strategy from 2013 to 2020 states that ‘investing in the education of Roma children {…} contributes not only to the prosperity of the Roma community but society as a whole’. This seems logical, if we take into account that increased participation in the labour market that derive from better education usually means higher government revenue from taxation and lower spending on unemployment and benefits.

To sum up, ensuring Roma have access to decent education in Croatia – and elsewhere - is not only an ethical imperative to achieve full participation of minorities in modern democratic societies. It is also economically beneficial for everyone.