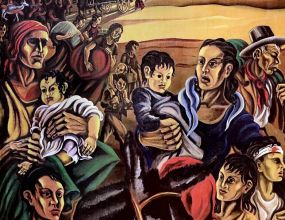 
The dominant stance when looking at the situation of Roma during the Spanish Civil War (1936-1939) has generally been one where Roma are portrayed as a neutral, disengaged community. This approach fits in quite nicely with commonly held notions of Roma’s lack of political interest in Spain. Given their distrust on state institutions, guided by high levels of social marginalisation with deep historical roots in the country, perceptions of Roma as apolitical are the norm in most analyses of their identity. In a 1989 interview, Spanish Roma guitarist Agustín Castellón Campos (aka ‘Sabicas’) said the following:

‘’No, I have never had political thoughts of any kind. We Gypsies do not have political inclinations. We just try to get by and play our guitars’’.

It is interesting how Sabicas’ self-perception contributes to feed essentializing notions of Roma identity as a politically detached group. He projects a very personal, political scepticism onto an entire, highly heterogeneous community, normalising it. Paradoxically, the many ways of ‘just getting by’ Roma have engaged in throughout their history, in a permanent struggle for survival, have precisely been – continue to be - a huge political process. Lack of involvement of Roma in mainstream political institutions, which cannot be equated to lack of political identity and practices, is best explained by Roma’s marginalised, deprived position in society, not attributable to some natural predisposition of Roma to ignore political action.

During the Spanish Civil War, many Roma were neither for nor against any of the two sides. Relatively few identified themselves with the ideological rationales behind the fighting factions. As Martín Sánchez explains, ‘their strong repulse to State policies was enough of a reason to justify such distance’. It is precisely this distancing that can, instead of being read as political detachment, be seen as a political choice in itself.

In any case, and contrary to popular belief, a number of Roma were in fact deeply involved in the War struggle in Spain. Such is the case of Roma artist and revolutionary figure Helios Gómez. Born in Triana, a traditionally working-class neighbourhood in Sevilla, his role both as an anarchist and later communist activist led intense opposition against the dictatorships of both Primo de Rivera and later Francisco Franco. Following Primo de Rivera’s coup d’état in 1923, his libertarian ideology and involvement in anti-fascist protests forced him into exile in 1927. Shortly after his arrival to Paris, he had to leave the city following demonstrations against the politically-motivated death sentence imposed in the US on Sacco and Vanzetti, two Italian anarchists. He lived as a refugee in Brussels, Amsterdam, Berlin, Vienna and Moscow, before returning to Barcelona in 1930.

During the Spanish Civil War, he used his skills towards the Republic’s propaganda effort, mainly by designing graphic posters which called for the defence of democracy against the Nationalist uprising. He combined these tasks with active military involvement. Photographer Agustí Centelles captured his presence, gun in hand, in the barricades of Barcelona shortly after the Civil War started. By the end of 1936, he was named political commissar by the General Workers’ Union (UGT), and led coordination of the Casanellas battalion in the Aragon front to stop the Fascist advance. His artistic contributions and his fighting spirit are considered an example of anti-fascist struggle in Spain.