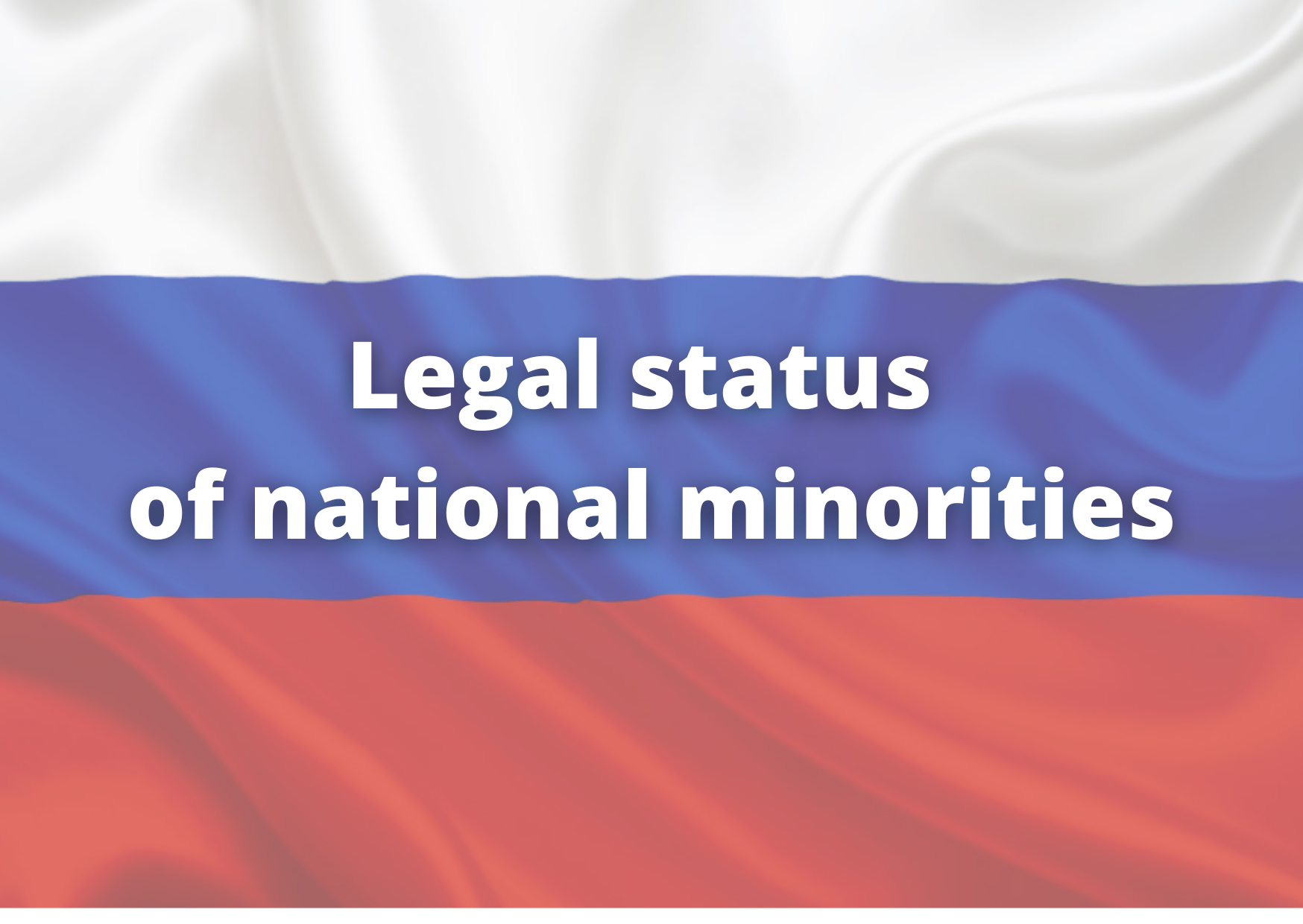 Russia is one of the largest multiethnic countries in the world. According to the 2010 Census, representatives of 193 ethnic groups live in Russia which comprises 22.3% of the whole Russian population or almost 32 million people. In the Republic of Dagestan alone with a total population of almost 3 million people, there are 104 nationalities (according to various estimates 30 of them are native peoples). As far as Roma people are concerned, almost 205 000 Russian citizens define themselves as Roma.


The ethnic categorization used in the current Russian legislation is very diverse with the notion of “national minority” being just one of it. Russian legislation doesn’t have a standardized definition of the term “national minority” and it doesn’t distinguish between legal statuses of various types of minorities (ethnic/religious /linguistic).  What’s more, the notion of “national minority“ is not disclosed in any way in the Russian Constitution, federal or regional laws. An attempt to pass a law on national minorities which would legally define the term was made in 1996 but the bill was rejected by the State Duma (lower house of the Russian Parliament) two years later. The bill defined national minorities as “Russian citizens who have enduring ethnic characteristics, are driven by the desire to preserve and develop their national language, culture, religion, and traditions, who don’t have territorial units within the Russian territory and who don’t belong to the indigenous peoples of Russia“.

The definition proposed in the bill made it clear that those ethnic groups who have their territorial units within the Russian Federation but live outside such territories couldn’t be classified as national minorities (for instance Karelians living outside of the Republic of Karelia).

The main document which defines the rights of the Russian citizens including representatives of national minorities is the Constitution of the Russian Federation.

Russian Constitution guarantees respect for human rights regardless of sex, race, nationality, language, origin, religious affiliation and prohibits any form of discrimination. Article 26 gives everyone the freedom to freely determine and indicate one’s nationality. This article is essential in the context of the Soviet past when an indication of nationality in the passport was mandatory.

Constitution also gives all 22 republics of the Russian Federation a right to establish official languages on their territory and use them together with the Russian language in the republican and local government bodies as well as republican state institutions. Unlike republics, other constituent entities can't establish their own official languages but are eligible to adopt laws protecting the rights of citizens, freely choose the language of communication, upbringing, education, and creative work.

Article 69 declares that the State protects the cultural identity of all peoples and ethnic groups of the Russian Federation and guarantees preservation of their ethnocultural and linguistic diversity.

In 2016 at the meeting of the Russian Council for Interethnic Relations, a consultive body reporting to the president which consists of representatives of the Office of the President, Russian ministers, deputies of the State Duma, chairmen of national cultural autonomies, representatives of other minority organizations, scientists and experts on interethnic relations, Vladimir Putin supported the idea of drafting a federal law on the Russian nation. However, the draft law was on the one hand widely criticized by the national republics fearing that it will emphasize the dominant role of the ethnic Russians at the expense of other ethnic groups, while more nationalistic part of the Russian society criticized the law for not mentioning the unifying role of the ethnic Russians. Finally, it was suggested to change the name of the law into “The principles of the state ethnic policy’’. Commenting on the decision the head of the working group on the preparation of the draft law on the Russian nation Valerij Tishkov pointed out that "Russian society seems to be not prepared for the concept of a single nation that unites all nationalities".

The Russian Constitution specially mentions small-numbered indigenous peoples and guarantees their rights in accordance with generally recognized principles and norms of the international law and international treaties ratified by the Russian Federation. In a more detailed way the term “indigenous small-numbered peoples” is disclosed in the “Federal law on guarantees of the rights of small-numbered indigenous peoples”. The law defines indigenous small-numbered peoples as ones who live on the territories of the traditional settlement of their ancestors, preserve the traditional way of life, economic activity, and crafts, number less than 50 thousand people, and feel as independent ethnic communities.

Very harsh climate conditions that put language and culture of some of the indigenous peoples living in the northern parts of Russia on the brink of extinction resulted in the adoption of the federal law “On the general principles of organizing communities of indigenous small-numbered peoples of the North, Siberia and the Far East of the Russian Federation". In spite of the importance of the adoption of the above-mentioned laws, none of them gives a clear answer to the question of whether the indigenous people are recognized as part of national minorities or they have a separate legal status in the Russian legislation.

The issue of national minorities is essential in the context of Russian federalism.

Russia is a federation that consists of 85 constituent entities which have equal rights and obligations towards the Federation regardless of their names (republics, territories, regions, cities of federal importance, an autonomous region, and autonomous areas). Though 26 Russian constituent entities were named after one or two ethnic groups which are usually called “dominant” or “titular”, neither Constitution nor any federal law directly mentions the ethnic principle of building a Federation. What’s more, according to the 2010 Census only in 9 out of 22 republics of the Russian Federation “titular” ethnic groups make more than 50% of the population.

The Republic of Dagestan is a special case as it doesn't have a titular ethnic group. However, the 6 largest by number native peoples of Dagestan with a population of more than 100 000 people make up 84% of the Republic's population.

In the 12 remaining republics, the share of the ethnic group after which the republics were named is less than 50%. The majority of the population of these republics are ethnic Russians.

As far as the regional level is concerned, constitutions of the republics and statutes of the autonomous areas use very vague wordings.  Either the “titular” ethnic groups are not mentioned at all or “self-determination” of the “titular” nation is mentioned with a reservation that the source of power belongs to the entire population of this region. In the constitutions of some Russian regions such as the Komi Republic and the Republic of Karelia special role of the “titular” ethnic group is emphasized without reference to the political power.

Vast internal migration that was a common practice in the Soviet Union resulted in a situation when a substantial number of its peoples found themselves outside „their“ national republics after the collapse of the Soviet Union. In 1994 ten members of the Commonwealth of Independent States (Russia, Ukraine, Belarus, Moldova, Armenia, Georgia, Azerbaijan, Kazakhstan, Kyrgyzstan, Tajikistan) signed the Convention on providing the rights of persons belonging to ethnic minorities. The Convention defined ethnic minorities as “the persons who are constantly living on the territory of one contracting Party and having its citizenship which differs from the main population of this contracting Party on the ethnic origin, language, culture, religion or traditions”. Azerbaijan and Ukraine signed the Convention with reservation on the supremacy of their domestic law over the provisions of the Convention.

In Russia, the Convention caused a wide discussion in the State Duma. In its conclusion on the Convention, the State Duma Committee for Commonwealth of Independent States affairs and relations with compatriots emphasized that the definition of ethnic minorities used in the Convention contradicts the Russian Constitution which doesn't distinguish between the “main” and the rest of the population. However, the main concern was related to the reach of the Convention which extended only to those people who had taken up citizenship of the state of residence. By recognizing citizenship as a criterion for being classified as a national minority, Russia will automatically legally deprive itself of the right to protect compatriots who decided against taking up citizenship of these newly formed states or couldn't receive it, as in the case of Latvia and Estonia. In 2003 the Russian President withdrew the bill from the State Duma and thus the Convention wasn't ratified by Russia.

This statement was made in the context of reservation introduced by Estonia when ratifying the Convention in January 1997. The definition of the term “national minority” made by Estonia de facto justified discriminatory measures against non-Estonians, predominantly Russians (according to the 2000 Census Russians made up 30 % of the Estonian population), limiting them in political and other rights.

But perhaps the biggest paradox of the Russian legal system is that it uses the concept of a national minority without recognizing the existence of a national majority in Russia, namely ethnic Russians which make 77.7% of the Russian population. This raises the question ”What kind of state is a modern Russia trying to build?”  Seems that Russian political elite seeks to apply formula that can be called “unity in diversity” which means that in a certain way Russia embraces the American concept of a “Melting pot“ implying that people of different ethnic origins, religion and culture come together to mix and merge, creating a new nation. At the same time, Russia at the legislative level provides these varied ethnic groups the right to preserve and develop their culture, religion, language, and traditions and moreover emphasizes this diversity. Only time will tell if the combination of these at first sight conflicting approaches succeeds or Russia will after all have to choose one of them.